Labrador Retriever Rescue – Give A Lab A Loving Home

It may come as a shock to you to learn that there are a number of different Labrador Retriever Rescue places in existence. After all, if they are such a beloved and popular breed, why do so many of them need to be rescued?

The truth is, some dog owners purchase Labradors without knowing what they are getting into. Once they discover the dog actually requires serious responsibility and attention, they are no long interested in committing themselves to the animal for the remainder of its life and give it up.

Some people get dogs for all the wrong, selfish reasons. That is why Labrador Retriever Rescue exists, and why so many of these beautiful dogs are left without a home to call their own.

While not every Labrador Retriever that is rescued finds a home, many of the dogs do have a happy ending, such as Keebler.

Keebler is a chocolate Lab that was rescued by the Labrador Retriever Rescue, Inc. in 1998. He was 3 months old at the time, and was given up by his owners who no longer wished to take care of the dog and were going on vacation. Keebler was purchased by the family during the time when everyone wanted a dog like “Buddy” – Bill Clinton’s dog.

The Labrador Retriever rescue eventually placed Keebler in a new home that they believe he would have forever, but after a few years, the family felt they could no longer care for him, and returned him to the rescue. After spending time in the care of different foster homes, and charming everyone he met, Keebler finally found the family that was committed to him.

He’s now happy as can be with his official family, and travels with them everywhere. He is a valued member of their family, and they can’t imagine their lives without him.

To discover more happy Labrador Rescue “tails”, and to learn more about how you can give a dog a second chance, be sure to check out LLR.org, and other rescues in your city, state or province. 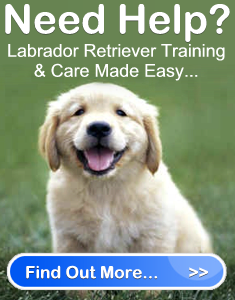